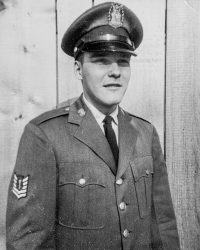 Dressed for service, embraced by protesters

As I walked to the line of students — and they all had their arms together, locked — I thought I’d have to fight my way through it. Instead, they let their arms open up, they let me through, and they said, “You are who we’re trying to save.” I never forgot those words. In other words, they were saying, “You are going into the military. You shouldn’t have to go to Vietnam. We know you’re not doing this because you want to. We’re doing this to bring people back because this is a war that we should not be participating in.”

In 1967, my own opinions about the war were being shaped by both sides. I felt I was lacking clarity. I was not a militarist, but I was influenced by uncles and my father, all of whom had served in World War II and were strongly opposed to Communism.

They said, “You are who we are trying to save.” I’ve never forgotten those words.

I was in the Air Force ROTC, and every Thursday, we had to wear our uniforms on campus. That included the day after the Dow protest, when there was a general student strike.

Having seen the violence that took place against the students, and having seen the fire and shock in their eyes, I felt anything was possible. I expected the worst.

As I was walking to my morning ROTC class, I did get taunts, and one person threw an egg at me. That afternoon, when I got to my economics class, the building was completely encircled by students with locked arms. They weren’t letting any students in. I thought I’d have to fight my way through. Instead, their arms opened. They let me through. They said, “You are who we are trying to save.” I’ve never forgotten those words. They were saying, in essence, “You should not have to go to Vietnam. We’re doing this to bring people back, because this is a war we should not be participating in.” 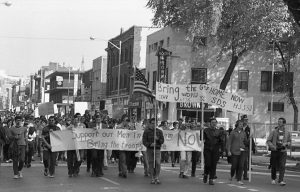 Protesters on State Street in Madison show their support for U.S. soldiers during a march against the Vietnam War. (Photo by Bob Grueneberg)

It made me realize that students were being misrepresented as crazies by the media, when in reality they were asking important questions. It opened my eyes to new perspectives.

It had an impact on me the rest of my life. Today, I would say I’m a political realist that has both liberal and conservative leanings. Some of my belief system shows up in the Republican Party, some in the Democratic Party. I find that balance is where most of America is at.

That was the great experience for me of the University of Wisconsin in 1967, and I think that’s been the Wisconsin Experience all the way through — this ability to get clarity in your thoughts, to keep an open mind. This is what a university education is all about.

Henz earned a bachelor’s degree in meteorology from UW–Madison in 1968, then served four years in the U.S. Air Force. He is a retired meteorologist and lives in Phoenix, Arizona.