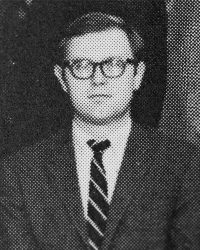 I was pretty much a liberal back then, but I supported what we were doing in Vietnam. At the time, I thought what the protesters were doing was wrong, though I understood their anger over the draft.

The Vietnam War showed me that our government can make bad decisions.

I was a business student and had most of my classes in Commerce, but on the day of the Dow protest, we couldn’t get in the building. So I watched from across Observatory Drive. I was an Army ROTC cadet, and we had been told by our commanders that if any of us were photographed at a protest, we’d automatically be thrown out of ROTC and drafted immediately. As cadets, we had basically already enlisted.

What I remember so well is that the protesters started chanting “Sieg Heil” and giving the Nazi salute to police officers. Many of the officers were World War II veterans. That was just not something you did. My dad was a World War II veteran, and I thought the protesters were crazy to do that. It caused the police to riot. I saw an officer pin a female student on the ground, face up. He was standing on her wrists and beating her head with a nightstick. I attribute that to “Sieg Heil.” I’d seen other protests, but nothing as ugly and as violent as that one.

UW–Madison student protesters mock police officers by giving the “Sieg Heil” Nazi salute during a demonstration against the Dow Chemical Company on Oct. 18, 1967. (Photo by John Wolf and Heiner Giese)

I felt sorry for the administration. They were caught between the conservative pressures of state government and the liberal leanings of the student body. I think they did everything they could — it was just a really difficult time.

In hindsight, looking back more clearly, I view the Vietnam War as a huge mistake. It showed me that our government can make bad decisions. I also can understand the protesters better now. I can’t blame them for protesting. Many of them had a lot of respect for Martin Luther King Jr. I think for the most part, they adhered to his nonviolent philosophy. But “Sieg Heil?” That was really, really dumb.

Today, I’m pretty much a moderate conservative and a libertarian. I’m a firm believer in smaller government, individual freedom and liberty. I’m also a very proud UW alum. My time there caused me to think more deeply about things before formulating an opinion.