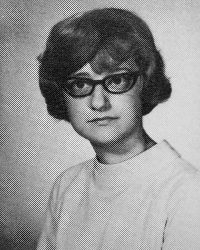 Against the war, in love with a soldier

It seems to me that when that stuff started, it was the beginning of the intolerance — the divide between the sides — because the stronger they got, the more, like, “If you don’t agree with us, we hate you.” Well, maybe not quite that strong, but it was that sort of thing. The intolerance started growing, and I think it probably grew on both sides. If you go back to Kennedy’s time or Eisenhower, if you were a Democrat or Republican, you could argue politics, and you could still be friends, you could still be neighbors, you could still get along. And when this stuff started, the divide started, and it wasn’t so easy to get along if you were on opposing sides, and it’s just gotten worse over the decades.

The same month as the Dow protest, the guy I ended up marrying got drafted. It caused me to see the antiwar movement from a different perspective.

I think that was the start of our current political divide, where there is almost no ground for compromise.

I wasn’t for the war, but I wasn’t for the way some of the protesters acted or for what some of them stood for. I once attended a quiz section in a fellow student’s hippie apartment. He had a poster of Che Guevara on the wall and this huge picture of Mao Tse-tung. It was basically a shrine to Communism. It was crazy. Being against the war was one thing and being a fan of Communism was quite another, and that was what creeped me out.

The protests weren’t so sweet and peaceful, we all know that. I didn’t think they should have interfered with people who were just trying to go to class and minding their own business.

When the crowds started getting big, you didn’t feel safe. If any police showed up, then the violence started. I tried to avoid big crowds. I was still in my teens, and it was uncomfortable and scary. It wasn’t fun dodging tear gas. 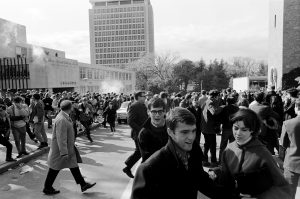 As police release tear gas near the Commerce Building on Oct. 18, 1967, students begin to flee and cover their faces. (Photo by John Wolf and Heiner Giese)

My husband is a Vietnam War veteran. A lot of the soldiers were drafted. They didn’t want to go. They did what was expected of them. They just wanted to stay alive. They got no respect going or coming back, and the protest movement started that. They got spit on and called baby killers, even if they weren’t.

There was no talking to the protesters. They thought they had all the answers. If I’d been older and wiser, I would have said, “Maybe the war shouldn’t have happened, but these soldiers didn’t go because they wanted to.” Our veterans deserved respect for their service, but that was something most protesters were unwilling to understand.

When a peaceful protest gets carried away and turns into a mob, there’s less tolerance for listening to the other side. I think that was the start of our current political divide, where there is almost no ground for compromise. That’s not a good thing for a democracy.

Yazzie graduated from UW–Madison with a bachelor’s degree in arts education in 1970. A retired Wisconsin state worker, she resides in Madison.