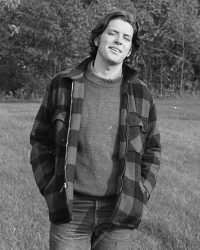 A first taste of tear gas, then anger

I was walking through the campus, walking my bike because of the crowd, and kind of glancing over at what was going on in front of Commerce, when suddenly there was a lot of movement. Police rushed in and at the same time they also rushed toward the crowd, and then they started firing tear gas and a tear gas canister literally hit the spokes of the front wheel of my bike, which was my first taste of tear gas. That pretty much began the change in my political attitude, you might say.

I was a sophomore at UW–Madison and walking my bike to class. I walked right into this big crowd outside the Commerce Building.

The police response was a catalyst. It got me going, got me thinking, got me aware.

I was against the Vietnam War and somewhat aware of the sit-in, but I hadn’t been involved in any protests. I was just standing there watching. I noticed these cops being awfully gruff and rough. They had helmets on and were carrying batons. Suddenly, some of the police charged into the building while others started pushing toward the crowd. Without warning, they began firing tear gas canisters. I was trying to get away when one hit the front wheel of my bike. That was my first taste of tear gas. It was painful — hard to see, hard to breathe. 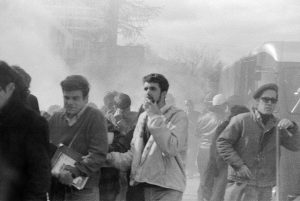 A shroud of tear gas envelops students and antiwar protesters on the UW–Madison campus on Oct. 18, 1967. It was the first time tear gas was used at the university, though it would be far from the last. (Photo by John Wolf and Heiner Giese)

It pissed me off. They were basically treating the crowd as if everybody was involved in the protest. Well, that was the beginning of what might be called my radicalization. I think that was probably the case for a lot of us in the crowd that day. The police response was a catalyst. It got me going, got me thinking, got me more aware. I went on to participate in many protests.

I think those experiences led directly to my becoming a lawyer and becoming involved in left-wing causes. In a strange way, it led me to work for the government as an assistant U.S. attorney, in large part because I developed this keener sense of justice.

Sometime after I graduated, my mother said to me, “It’s really too bad you had to go to the University of Wisconsin with such turmoil going on.” I said, “Mom, I wouldn’t trade that for the world.” That was one of the best things that ever happened in my life. I look back on it as a great experience from a political, personal and historical point of view. It was part of my education.

Grueneberg is a retired assistant U.S. attorney who graduated from UW–Madison with a bachelor’s degree in history in 1971. He resides on Lake Sinissippi in Hustisford, Wisconsin, where he builds wood kayaks.