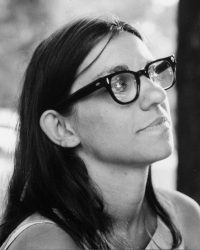 On the frontlines, impassioned and in danger

I remember how angry we all were that the United States was dropping napalm on children in Vietnam and Dow Chemical Company was making it and the University of Wisconsin was allowing Dow Chemical to come and recruit students on campus. Everybody was so angry, and that’s what caused this demonstration. We were just so angry that our country was doing this and that Madison was allowing this company that was murdering people to recruit people from the student body to go do this again.

I was married and a graduate student in the fall of 1967. My husband and I were involved in the politics of the day. It was natural. The world was falling apart. We felt we didn’t have any choice.

The United States was dropping napalm on children in Vietnam. Dow Chemical Company was making it, and the university was allowing Dow to recruit students. Everybody was so angry.

I remember showing up at the Commerce Building the day of the Dow protest. We just filled the building. You couldn’t walk. There was no space to breathe. A whole bunch of us went into the dean’s office — it was completely packed — and said to him, “We’re not leaving here until the university agrees not to allow Dow to recruit on this campus.” He was very calm. He tried to explain to us that if people wanted to work for Dow, they should be allowed to. We said there were things that were right and things that were wrong. We had an obligation to prevent wrong from happening.

We knew we were putting ourselves at risk, we didn’t doubt that. We didn’t feel like we had a choice. I was feeling very powerful when we were in the dean’s office, but when the police arrived, I was terrified. I was pregnant at the time, so I was scared in a number of ways. 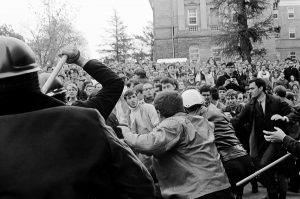 A Madison police officer raises his nightstick during the violent melee that ensued on the UW–Madison campus after officers forcibly cleared anti-Dow protesters from the Commerce Building on Oct. 18, 1967. (Photo by John Wolf)

I guess we weren’t as smart as we thought because we decided we were going to put tables at the back doors to prevent police from coming in the back way. Eventually, of course, the police came through the front doors and started using billy clubs and pushing us. People had trouble getting out the back doors. We had blocked our own escape route. We got out by climbing over and under the tables. It slowed us down.

When we got outside, we saw someone standing behind a police van and letting the air out of its tires so that they would not be able to easily drive away the people they’d arrested. We thought that was brilliant.

I do believe that actions like the Dow Chemical Company demonstration and things that were happening on other campuses across the country really did help end the Vietnam War. We succeeded in helping to end the war by taking it to the streets.

After last year’s presidential election, we became active again because the world is falling apart again. We’re experienced in it, and here we are again.

Madell earned a Ph.D. in communication sciences and disorders from UW–Madison in 1969. She directed speech and hearing clinics for many years, and has written seven textbooks. She continues to lecture nationally and internationally. She lives in New York City.